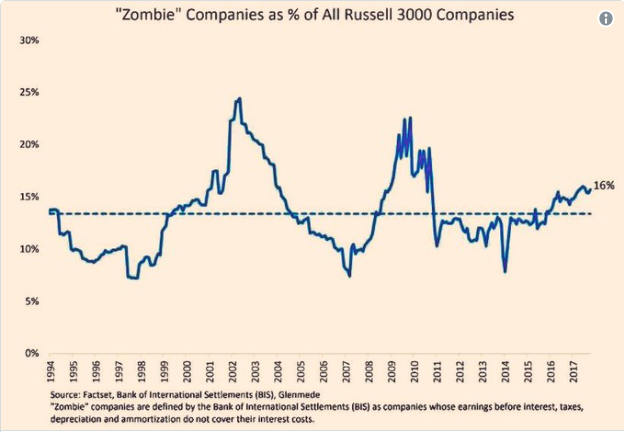 "After several years of smooth and steady increases, equity markets provided a very small dose of realism over the past several weeks. Markets dropped on several days as investors became concerned about rising interest rates. While the headlines were quite dramatic, the declines were small in percentage terms and the markets quickly made up most of their losses. Given the extreme levels of overvaluation, these drops are not nearly enough to put companies that meet our standards for value and quality into our buy range.

The recent market volatility highlights the risk posed by the rush into passive investments and automated trading strategies. These strategies are very similar to the elements that resulted in 1987’s market crash. Back then, institutional investors believed that they each had a proprietary computerized system that would automatically get them out of the market once it started to go down. What they didn’t realize was that everybody else had a similar program. When the market turned negative, all of the programs were activated at the same time. It was like a herd of elephants trying to get through a very small door. The result was Black Monday; a one day drop in equity prices of 25%.

Today’s passive investment and automated strategies have the potential to cause such an event again. The difference this time is that the dollars are substantially larger and the computers faster and more powerful. Should an exogenous event such as a political or geopolitical crisis materialize, these strategies and/or programs could be the “accelerant on the fire”. "

"The fiscal and monetary policy remedies that began in 2008 to prevent a repeat of the 1930s achieved their stopgap measures, at least temporarily. The subsequent compounding of mispricings, malinvestments, and other distortions—to say nothing of substandard economic performance and growing instability—leaves us wondering whether the tin can of inevitable consequences was simply kicked down the road. Returning to Hayek, we think it not totally unreasonable that the post-2008 intervention may ultimately be remembered as an “undisputed failure.”

(...)  Further, while consumers are spending more, they also are spending more than they have! Federal Bureau of Labor Statistics data show that the average U.S. household spent 94% of its 2017 annual income on consumer goods (including medical expenses) and spent another 10% servicing debt—mortgage and consumer. The math looks odd, because the resulting expenditures (104%) exceed total income. Considering the 2.4% savings rate, households outspent their incomes by 6.4%. (Does this sound like any federal government you know?!) That excess was satisfied by consumer-credit expansion of $551 billion. Comparatively, GDP grew by $513 billion. Positive consumer sentiment can only drive sustainable economic growth if consumers have sufficient funds to maintain spending. Whatever growth we see in consumer spending today has largely been bought on credit that must be repaid tomorrow. Sadly, as noted parenthetically above, profligate Uncle Sam has not set a good example.

(...)These are just samples of the problems in the universe of exchange-traded products, but even more complicated versions exist. Exchange traded notes (ETNs), for example, are packaged derivatives on futures contracts, wholly reliant on the solvency of the issuer. They are massively leveraged products used to short volatility, a profitable trade of late, but whose value can disappear overnight should volatility return anywhere close to historical levels. Such trades were typically the domain of sophisticated investors at specialty hedge funds. They are now freely available to any investor with a smartphone. This is the exchange-traded product universe.

Today’s financial markets are quite unlike those from even 10 years past. The current environment has spurred legion new products, many of which have never encountered a bear market. Quite likely, the weaknesses on the horizon portend greater flaws still out of sight.

(...) In this context, the melt-up scenario is much more plausible. Even though a record number of professional investors believe the market is overvalued, they know they’re on a short leash if they underperform for very long.

(...)Finally, and most importantly, is a sense of gratitude I feel toward you, our clients. Few investors would have passed the Stanford marshmallow test with flying colors the way our clients have, even in spite of me putting them through the most extreme test of deferred gratification. In the essay, “Why 1925?,” we quoted Ben Graham as saying that unless an investor had the fierce independence and temerity to step away from the madness in 1925, the chances of surviving the debacle of the Crash12 and the subsequent Great Depression were 1 in 100. Whatever storms may lie ahead, we ardently believe that our clients will be among those who survive and thrive. In the greater social context, they will be the ones through their eventual bid who might prevent a downward market spiral devoid of buyers from disintegrating into social and political chaos.